SEE the CONNIE breath its Flames

These videos graphically capture the essence of the Wright R-3350 engines that propelled the Constellation. It must have been unnerving for first time passengers on board to see fire shooting out of all 72 cylinders into 12 exhaust pipes, but in those days this was the norm.
The video sequence below begins with a restored KLM L749 Connie starting up and taking off in daylight hours. I posted this to show you the stark difference of engine exhaust flames from daytime to night flights. The second video is from inside the cabin up close and personal. The third video is taken from the ground as she takes off at dusk with engines howling and breathing flames! Just a spectacular view of the greatest prop driven airliner ever put into service.

The final video below shows a Super Constellation taking off in the darkness of night showing the full effect of the Wright R-3350 engines at 100% output. Spectacular!

To heck with air pollutants and quiet engines, this is shear beauty at its finest in vintage air travel. As someone once quoted,


Thank you Jack Frye, Howard Hughes & Lockheed
for making this beautiful ship for the world possible.
Posted by EJohnson at 12:16 PM No comments:

The Wright R-3350 power plant was the engine of choice by Kelly Johnson of Lockheed. His aim was to provide the most horsepower available for the new L049 Constellation in order to attain maximum load capacity and speed.
Early versions of the R-3350 were equipped with carburetors, though the poorly designed elbow entrance to the supercharger led to serious problems with inconsistent fuel/air distribution. Near the end of World War II, the system was changed to use direct injection where fuel was injected directly into the combustion chamber. This change improved engine reliability. After the war the engine was redesigned, and became a favorite for large aircraft, notably the Lockheed Constellation and Douglas DC-7. 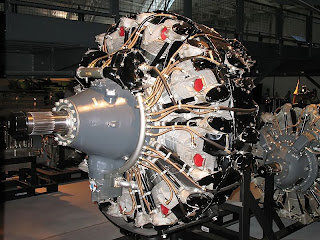 18 cylinders, 2500 horsepower
Following the war, to better serve the civilian market, the Turbo-Compound system was developed to deliver better fuel efficiency and thus economy. In these versions, three power recovery turbines (PRT) were inserted into the exhaust piping of each group of six cylinders and geared to the engine crankshaft by fluid couplings to deliver more power. The PRTs recovered about 20 percent of the exhaust energy (around 450 hp) that would have otherwise been wasted, but reduced engine reliability. The fuel burn for the PRT equipped aircraft was nearly the same as the older Pratt and Whitney R-2800, while producing more horsepower. 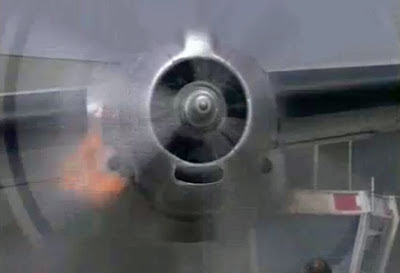 Posted by EJohnson at 4:31 PM No comments:

Image courtesy WHMCKC
Up to this point of Jack Frye's ten year span as TWA's president in 1944, this is quite a resume of aircraft development with Mr. Frye at the helm. Even more impressive is the fact that Jack as The Flying President not only flew passenger over the country, he had a large hand in the design specifications of these 5 ground breaking aircraft. Usually top tier executives leave everything up to their engineering groups. Not Jack Frye, he was an on-hands type of leader that 'knew and flew' these aircraft intimately and loved every aspect of flight
The DC-1, DC-2, DC-3, 307 Stratoliner and the greatest prop driven airliner ever conceived, the Constellation. With these five aircraft he covered the whole gamut of manufacturers including Douglas Aircraft, Boeing Aircraft and Lockheed Aircraft. It doesn't get any better than that. 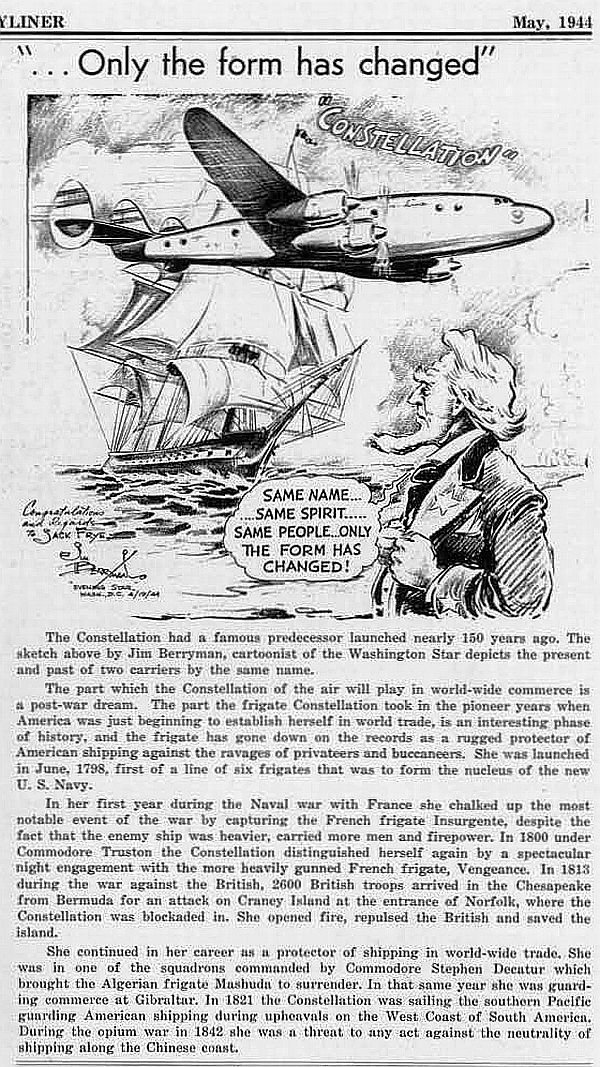 Posted by EJohnson at 6:58 PM No comments: 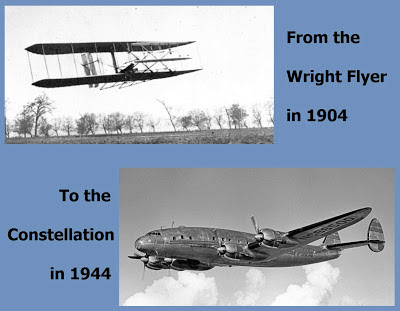 
After all of the fanfare and press coverage of the historic flight on April 17, 1944, the Constellation was flown up to Dayton Ohio at Wright Field where Oroville Wright boarded the new super-plane 41 years after his historic flight of the Wright Flyer at Kitty Hawk , North Carolina. This must have been an incredible thrill for the pioneer of powered flight to again climb into the vast cockpit and control over 8,000 horsepower! Quite a leap from his flimsy flying machine of only 12 horsepower wouldn’t you say?

Caption reads,
This was another red-letter day in the life of the Constellation. At Wright Field, headquarters of the AAF Material Command. Oroville Wright, who piloted the first heavier than air flight 41 years ago, boarded the Connie for a demonstration hop. The wing span of the Constellation is 123 feet, three feet longer than the distance the pioneer aircraft designer and flyer covered in his historic first flight in 1903. Wright sat at the controls of the Connie for a few minutes. Later he commented: “I guess I ran the whole plane for a minute but I let the machine take care of itself. I always said airplanes would fly themselves if you left them alone.” 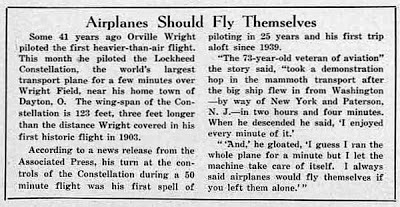 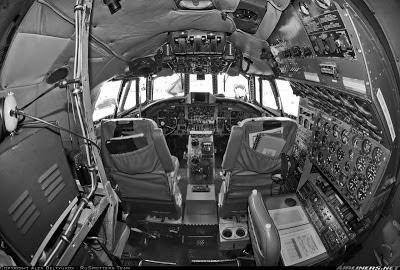 Above is what Oroville saw when he stepped
into the cockpit of the Connie. WOW!
(courtesy airliners.net) 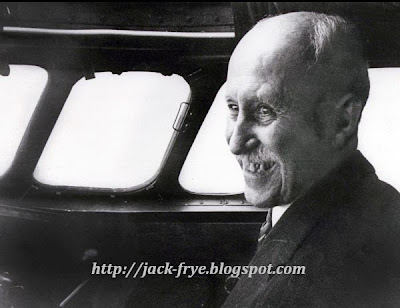 It’s just a wonderful thing to know that Orville, on the final flight of his life, flew this giant airliner Jack Frye originally conceived in 1937. For Jack Frye to have this connection in aviation history is a very special privilege to have been a part of.

It's not very often you encounter historical documents or anything directly connected to a special moment of history. As a matter of fact with what I am now able to share with our blog followers, this could not happen without the generosity of John Roper and the National Airline History Museum. I consider these images in the top 3 of the items I have shared on the Jack Frye blog to date! They are very cool... Thank you very much John, and the Museum!
What you are viewing is the actual flight log of the historic April 17, 1944 flight of the Constellation flown by Jack Frye and Howard Hughes marking a new record non-stop flight that rocked the world.
Another thought I have related to the coming recreation Flight of the Connie in 2014 is, I wonder how close the flight crew of that future flight will be able to come to the numbers recorded on this original log. If I were on the flight crew my competitive nature would tell me to better the 6:58. Something tells me Jack Frye would attempt to better it as well. Prevailing weather will surely have its say on the result but the comparison's will be interesting to see. 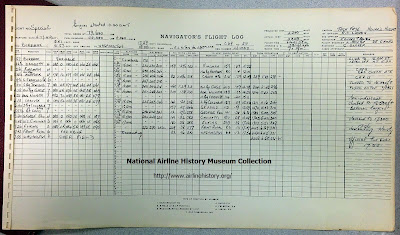 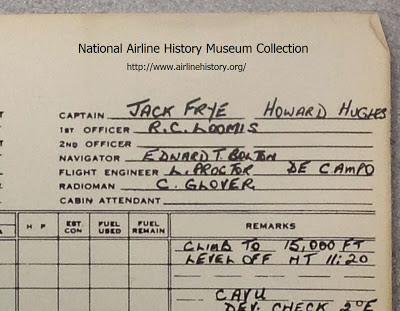 Images courtesy National Airline History Museum, 2013
Enjoy studying the original flight record of one of the most famous flights in aviation history right here on the Jack Frye blog, the online home of the famous aviator that made it happen.

Posted by EJohnson at 9:33 PM No comments: