Jack Frye announces TWA's statistics for business year, 1936 with great anticipation of the future. Always pushing, always perseiving the future how he is to lead and direct the affairs of his young company into the global giant TWA will become. 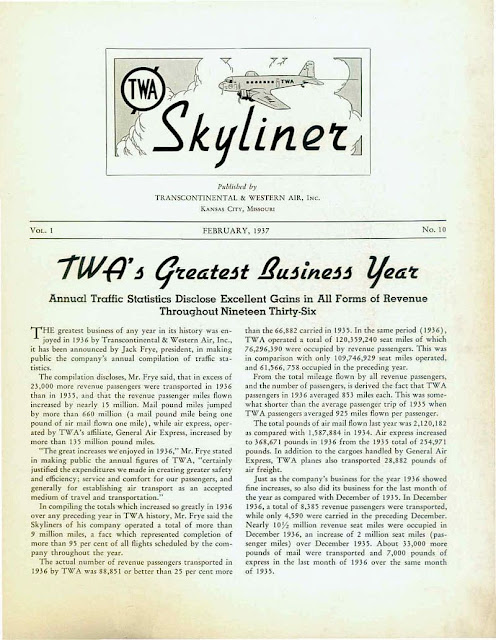 Images courtesy WHMCKC
Posted by EJohnson at 10:03 PM No comments:

Here is a glimpse into a Skyliner cabin in which Jack Frye and company spearheaded for the benifit of in-flight passenger comforts. A pioneering concept made into reality thanks again to Mr. Frye's vision and desire to make air travel as comfortable and safe as possible. The one characteristice of the flight crew I see here is - Service. A similar purpose that was and is exhibited in hotel management taken to the skies. 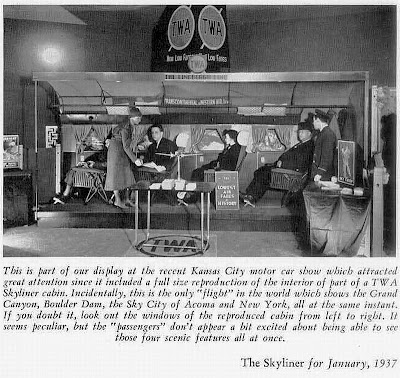 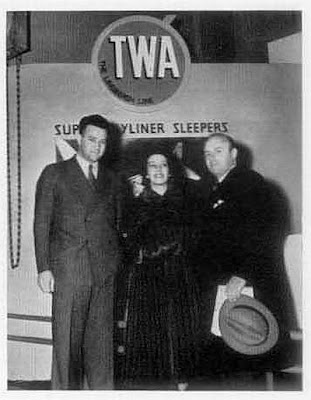 TWA president Jack Frye with Miss Lilly Pons, noted operatic and radio star, and Miss Pons fiance, Andre Kostelonetz, composer and conductor. The three were photographed before one of the company's displays at the 1937 Kansas City motor show.

Images courtesy WHMCKC
﻿
Posted by EJohnson at 2:29 PM No comments:

Here we have Jack Frye in his second year as TWA President wishing TWA employees a very Merry Christmas in 1936, as well as admonishing them for a job well done. By his words one can easily tell Mr. Frye loved his employees and realized they're huge contribution to the company's success. This attitude and persona of Mr. Frye continued throughout his 13 year tenure as TWA's president.
Jack Frye was and still is a very well respected President and businessman industry wide. It is true that even today, retired TWA employees speak very well of Jack Frye's positive influence and guidence of TWA during its infancy, through to its worldwide success as an airline leader. This especially makes this writer proud knowing uncle Jack always put others first to the point he would not succumb to the negative trappings one could easily weild with the power and influence he possessed. 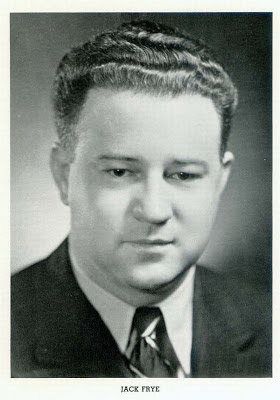 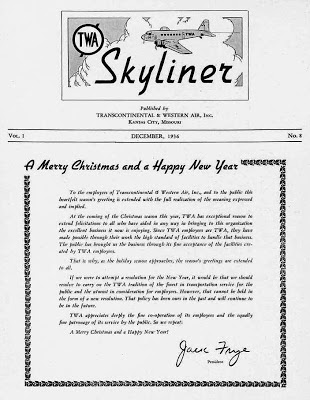 Images courtesy WHMCKC
Posted by EJohnson at 8:38 PM No comments: 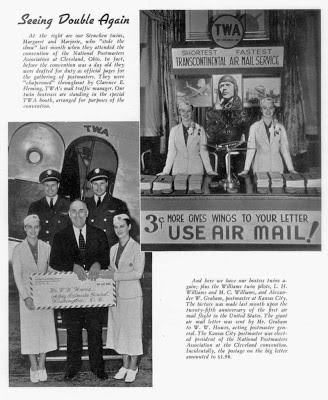 On the 25th anniversary of the very first air-mail flight in the US, the National Postmasters Convention in 1936 was held in Cleveland Ohio in which the Steuken twins, Margaret & Marjorie stole the show. Here they are shown at the TWA booth displaying the air mail service provided by the company. Can you imagin a $0.03 postage on a air mail envelope! Secondly, TWA's 'twin pilots', L.H. & M.C. Williams are posing with the Steuken twins and Mr. Alexander Graham, the Kansas City postmaster showing off TWA's $1.98 fare for a giant air-mail letter.

A great shot of a DC-2 Skyliner cruising past the Kansas City headquarters plant.
Images courtesy WHMCKC
Posted by EJohnson at 12:36 AM No comments:

Email ThisBlogThis!Share to TwitterShare to FacebookShare to Pinterest
Labels: DC2 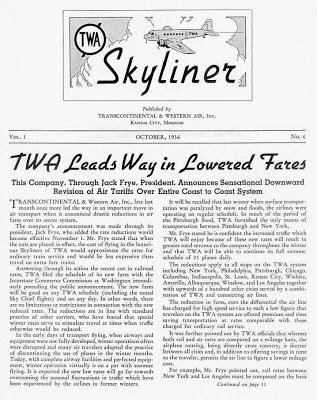 An historic announcement by Jack Frye to the airline industry - 'drastically reduced airfares'! At this point in 1936, Transcontinental & Western Air had a fleet of 21 airliners that would be serving coast-to-coast, 24 hours a day. Frye openly and positively stated that as a result of these reduced fares and increased passenger travel now being less than extra-fare rail travel, revenues would increase.

This is another groundbreaking milestone in airline history in whick Jack Frye and TWA lead the way. Another vision Mr. Frye and company enjoyed for the benifit of the passenger travel industry, and the company's future. 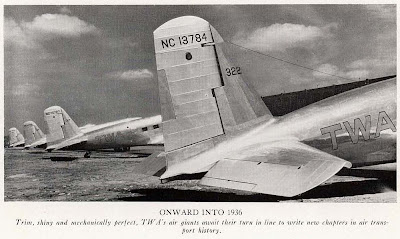 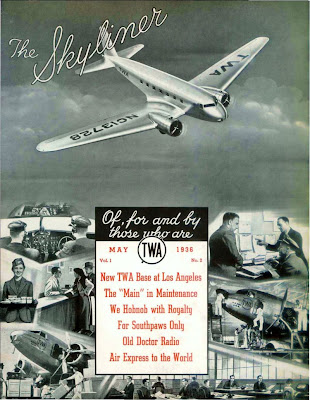 This is the cover of Vol.1, issue 2 of The Skyliner magazine. It now dawns a great artist rendition of the DC-2. If you look at the mid righthand side of the artwork, you will see Jack Frye speaking with a pair of coworkers with what appears as operations conversation. A close up of this depiction of Mr. Frye can be more easily recognized below. I have typed his name in red.

Posted by EJohnson at 9:26 PM No comments: 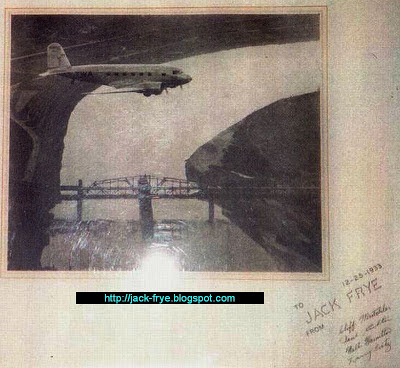 What we have here is a large and one of a kind photograph of the new DC-1 flying over the Hannible Bridge in St. Louis Missouri. All indications show that it measures 18" x 16". This is a photo that is part of Jack Frye's personal collection, but its wherabouts is unknown. It was presented to him on Christmas day, December 25, 1933 by either some employees or a team at Douglas Aircraft. There are four names inscribed on the matte but I havent been able to perfectly identify yet.

I received this photocopy in 2005 from Jacks brother in law. It is a prized possession and it is hoped the photograph and other personal possessions of Jacks are located and put in proper display for the public to view, and or returned to Jacks rightful living heir. At least now we can view a new piece of airline history right here on the Jack Frye blog.

Any information of the wherabouts of Jack Frye's personal collection and TWA memorabilia are greatly appreciated.

Please inquire here and the proper representative of the Jack Frye family will be in contact with you. 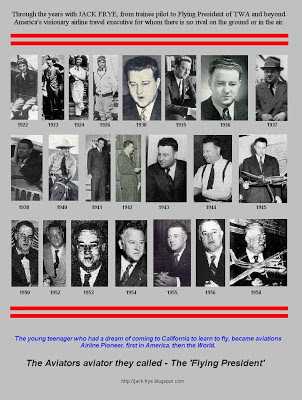 Since that day on the Texas ranch when he greeted some Jenny pilots that had made an emergency landing, young Jack was intertwined with the flying bug and never looked back. Little did this young teenager know in 1918 he could become the President of TWA as early as 1934, the pioneer aviator/executive that would change the world forever.
Rigth click on image for full view.
Eric

Look what Jack Frye started as we move into TWA world travel with the DC aircraft he helped develop with Douglas Aircraft. With only about 150 units produced, this model was virtually a long period prototype to the DC-3, the most successful all metal aircraft of all time! TWA operated a total of 31 units.

To help get us a little more cozy with early DC aircraft, the first ever Douglas airliners, this is the well known UIVER (Dutch for Stork) DC-2 replica in KLM Royal Dutch Air Lines colors. It was owned by the Aviodrome Aerospace Museum in the Netherlands. Unfortunately the operation has gone into bankruptcy and is looking for new investors. Click here for the latest info.

They owned two originals at one time until one of them was destroyed in a crash described below. The plane in this video is its KLM replica replacement. A US Navy original flown to the Netherlands and painted in original format. The other lone original is in a bad state of repairs at the museum. Hopefully both of these historic aircraft will be placed in a new home for all to see.

Although overshadowed by its ubiquitous successor, it was the DC-2 that first showed that passenger air travel could be comfortable, safe and reliable. As a token of this, KLM entered its first DC-2 PH-AJU Uiver (Stork) in the October 1934 MacRobertson Air Race between London and Melbourne. Out of the 20 entrants, it finished second behind only the purpose built de Havilland DH.88 racer Grosvenor House. During the total journey time of 90 hours, 13 min, it was in the air for 81 hours, 10 min, and won the handicap section of the race. (The DH.88 finished first in the handicap section, but the crew was by regulations allowed to claim only one victory.) It flew KLM's regular 9,000 mile route, (a thousand miles longer than the official race route), carrying mails, making every scheduled passenger stop, turning back once to pick up a stranded passenger, and even became lost in a thunderstorm and briefly stuck in the mud after a diversionary landing at Albury racecourse on the very last leg of the journey.
source: Wikipedia 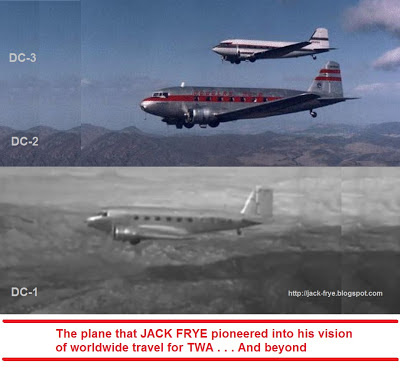 The only DC-1 cropped in with a TWA DC-2 shadowed by the great DC-3
Posted by EJohnson at 11:40 PM No comments:

Now what is a slinger-ring and what does it have to do with an airplane. It sounds like a lubrication impliment we use in Industrial Hydraulics to keep a component free of burning up from fluid cavitation. I think I remember my dad calling out a slinger ring on an automobile engine crankshaft also serving as a lubrication device. Nope, not in this case.

Have a look above the cockpit on the DC-1 photo above. Yep, thats the slinger-ring the TWA radio department referred to as an auxiliary anti-static antenna to eliminate radio static caused from rain, snow and dust. It was first installed on top of the fuselage later to be repositioned below decks out of the prop wash as shown below. The device could also be rotated from the cockpit to obtain the best radio signal. 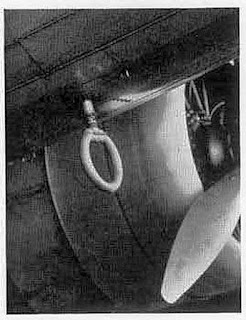 Click link for a photo of Tommy Tomlinson and Frank Busch standing next to the Northrop GAMMA "Overweather Experimental Laboratory" showing the multidirectional loop antenna aft of the propeller.
Another little known fact about TWA's pioneering equipment development that effected other airlines industry wide. And Jack Frye was the big thrust behind pushing communications into the forefront of safe operations for his flight crews, and passengers.
As a sidenote, Jack Frye was an innovative inventor holding many US Patents. One of them is an Anti-Static device patented in 1954. I cant help but think the slinger-ring anti-static antenna had an influence. Another thought - Before cable reception, do you remember your old B&W or color TV having to utilize rabbit ears or that cumbersome circle shaped antenna that had a rotating feature you could point towards the tower to obtain a better picture even how grainey it still was? Those very well could have required the companies that produced them to pay royalties to Jack for this invention... Just a thought.
Images courtesy WHMCKC
Posted by EJohnson at 7:51 PM No comments:

Line Squalls was renamed TWA Speed in 1935 of which this is the cover of the employee magazine. Images courtesy WHMCKC. 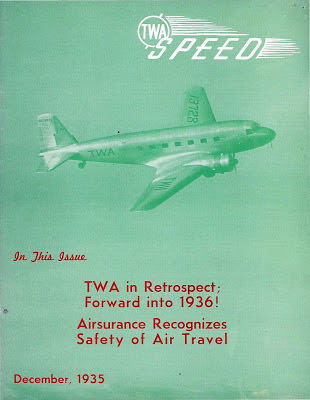 In 1935 there were a host of notable firsts in airline history created with Jack Frye being the prime mover and visionary to improving safety and efficiency. 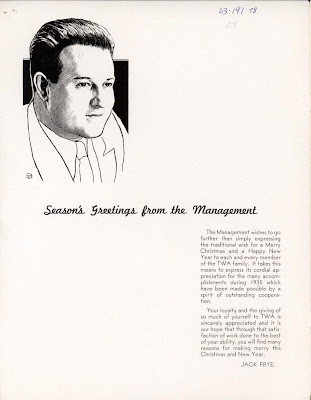 A Seasons Greetings message from the President

Posted by EJohnson at 7:50 PM No comments:

Or more commonly known as, the DC-1. The very first all metal airliner design that set in motion a revolutionary jump in passenger and cargo travel thanks to Jack Frye. We have extensively covered the no.1's design concept and its history beginning with Jacks famous letter of new design specs to his friend Donald Douglas, the fifth of five vendors who accepted the task.
To read all about it, click here for the DC1 page from beginning to its lonely end.
From here we will be sharing some really neat articles and photos beginning in 1935 when the DC aircraft were known as TWA Skyliners.

Here is a short walk around video of a DC-2 in vintage TWA colors. She sure looks great doesn't she? I am not sure if this is an original ultra rare DC-2 or a replica. I am aware of only 2 at most of the original 150, maybe one of them flying today. I am in search of any video of a real DC-2 and will post on the blog if ever revealed.

The following image is what is known as the 'Radio Trophy', a very attractive award that went to the most efficient landborn radio stations in support of TWA airliners during point to point communications in all manner of weather conditions. In December 1935, this award went to the 'Pittsburg Radio Department'. 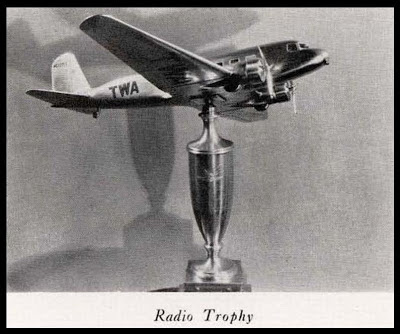