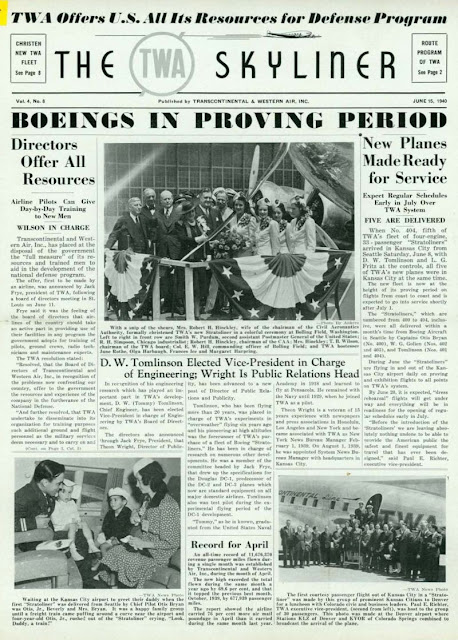 Five new 33 passenger Boeing Stratoliners slated for TWA service are now being tested on daily flights from Kansas City throughout the TWA system. No's 400. 401, 402, 403 and 404 all together on the tarmack together, gleaming ready for the task mark the next milestone towards full service coming in July, 1940.
Also announced in this months Skyliner headline page is the appointment of DW 'Tommy' Tomlinson as the new Vice President of Engineering. If you remember Tomlinson was the cheif flying engineer who with Jack Frye were the pioneers in 'over-weather' flight testing with many dangers and unknowns. This key testing undertaken by Transcontinental & Western Air led by Frye was the forerunner to the Stratoliner's design and purpose with it being the very first airliner with a pressurized fuselage.
I'll bet if you ask anybody on the street the question, "What airliner was the first to fly passengers above the clouds in a comfortable pressurized cabin", none if any would know the answer. It's kind of a sad report on such a great airplane and it's key role in todays modern commercial travel history.
Image courtesy WHMCKC
Posted by EJohnson at 6:42 PM No comments: 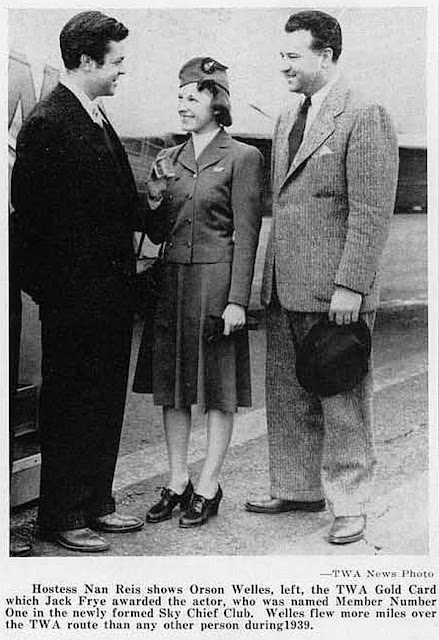 Image courtesy WHMCKC
TWA offered memberships into what they called the Stratoliner Club. These medallions were issued to members before the war in 1940. Shown enlarged for detailed viewing. 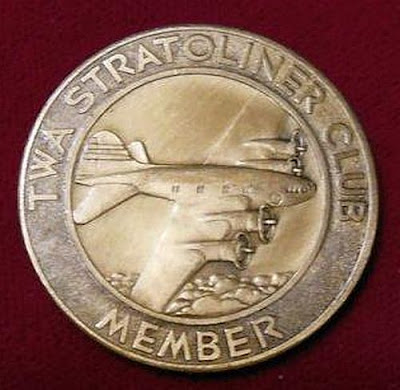 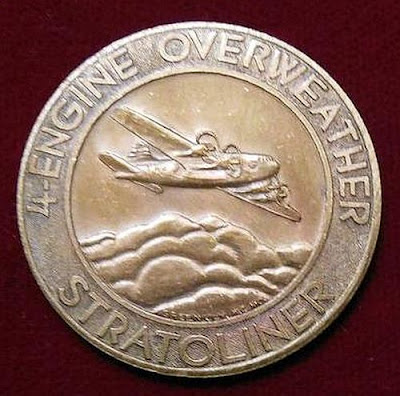 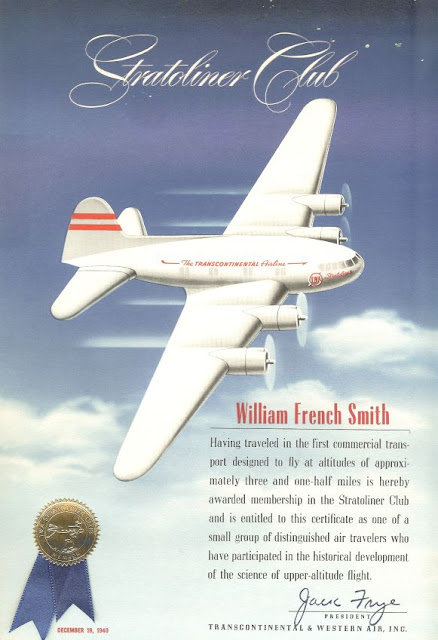 Paper certificate signed by Jack Frye
Posted by EJohnson at 9:24 PM No comments: 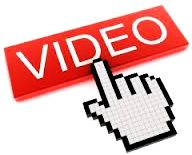 The button above is provided should you wish to quick-link to all current videos on the Jack Frye - Aviation Pioneer blog. Just click and you will be directed to all posts with a video attached. This will include all future video uploads as well. Make it a favorite on your browser too.

Posted by EJohnson at 7:47 PM No comments:

On March 26, 1940, US President Franklin D. Roosevelt, Robert Hinkley, chairman of the Air Safety Board and Colonel John Stilwell, president of the National Safety Council publish letters of great achievement in safety and progress to Jack Frye and his company, Transcontinental and Western Air, Inc. The safety record they speak of in this release is truly remarkable in the continuing success story of our favorite airline president. 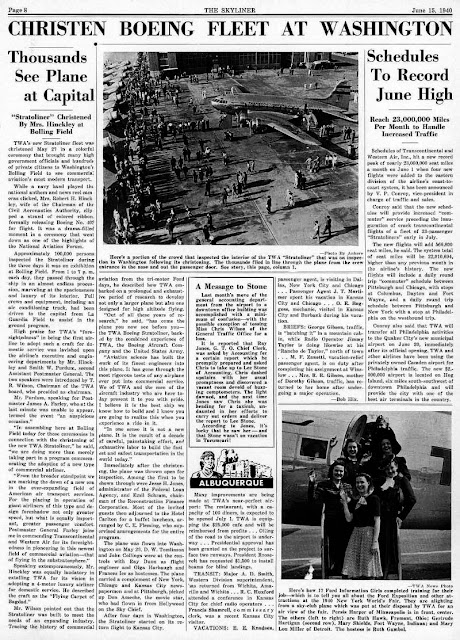 
May 27, 1940 brought Mrs. Robert H. Hinckley, wife of the charman of the Civil Aeronautics Authority to Bolling Field, Washington. She clipped a strand of colored ribbon officially releasing Boeing no. 402 for flight. Over 100,000 excited onlookers were on hand over three days to inspect the TWA Stratoliner, and to witness this momentous occasion that launched above the clouds flying, a new first in airline history. Many high praises went to TWA's executive and engineering staff for being the first to adopt the aircraft for domestic service. Jack Frye must have been especially proud of this great acheivement.
Posted by EJohnson at 8:16 PM No comments: 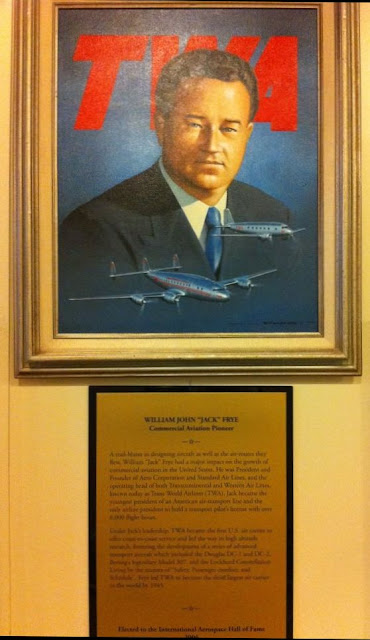 Photo and presentation made at the San Diego Air and Space Museum, the placard reads

A trail-blazer in designing aircraft as well as the air routes they flew, William 'Jack' Frye had a major impact on the growth of commercial aviation in the United States. He was president and Founder of Aero Corporation and Standard Airlines, and the operating head of both Transcontinental and Western Air Lines, known today as Trans World Airlines (TWA). Jack became the youngest president of an American air-transport line and the only airline president to hold a transport pilot’s license with over 6,000 flight hours.

Under Jacks leadership, TWA became the first U.S. air carrier to offer coast-to-coast service and led the way in high altitude research, fostering the development of a series of advanced transport aircraft which included the Douglas DC-1 and DC-2, Boeings legendary model 307, and the Lockheed Constellation. Living by the manner of 'Safety, Passenger comfort, and Schedule', Frye led TWA to become the third largest air carrier in the world by 1945.

Elected into the International Aerospace Hall of Fame.
2006
Posted by EJohnson at 10:00 PM No comments:

Email ThisBlogThis!Share to TwitterShare to FacebookShare to Pinterest
Labels: IAHOF 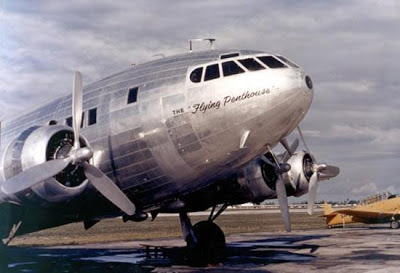 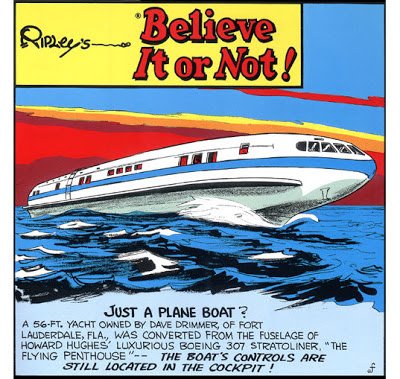 Howard Hughes personal 307 converted into a houseboat!
The COSMIC MUFFIN is without a doubt the most unique one of a kind houseboats in the world. Its current owner Dave Drimmer keeps the Muffin in shape in an effort to maintain the legacy of one of Howard Hughes luxuries of the day, his Flying Penthouse. I only post this segment because of Howards relavence to Jack Frye and TWA's future, for his major investment in the company that set in motion a new direction toward world travel the likes that had not been realized by 1940. The Cosmic Muffin allows us a glimpse into Howards out-of-the-box thinking in terms of luxury that possibly translated into more passenger creature comforts for the next airline decade. You have to admit, this houseboat is pretty cool and turns heads wherever it cruises.
Posted by EJohnson at 7:30 PM No comments: 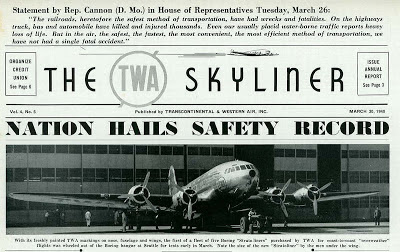 In connection with the introduction of the new Stratoliner in 1940 as shown above at the Boeing Seattle plant, Representative Cannon, (D. Mo.) states in retrospect that railroad and automobile travel has been the safest in the land. But he follows up his summary that airline travel has not experienced one fatality so far in 1940. Jack Frye's vision has finally become the universal standard from which all future air travel is to be conducted. Remember his motto? Safety, Comfort and Schedule. 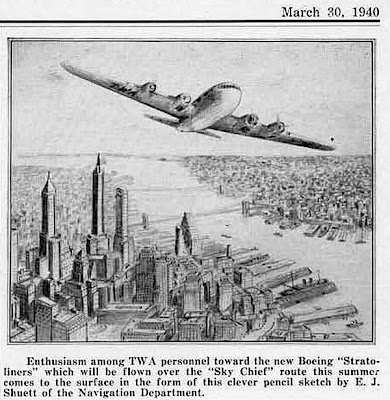 President Frye making an announcement to all TWA employee's the challenge ahead as more and more customers make flying a preferred mode of travel further and further away from home. The world is suddenly becomming smaller and smaller in 1940 and he is fully aware of its huge impact on air service.

Image courtesy WHMCKC
Posted by EJohnson at 1:29 PM No comments:

Enter the new Boeing Stratoliner 307 into the TWA fleet 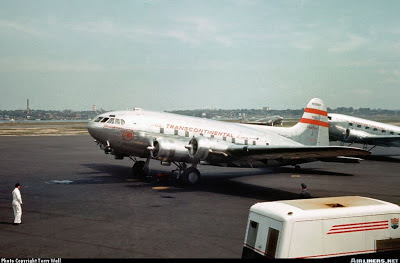 Up to 1940, the DC-3 was a very successful ship for TWA and other airlines that until today are still considered the most successful airplane ever produced. But it lacked an all-encompassing comfortable flight for passengers flying through weather in altitude ranges of 5-10,000 feet. By 1937 it was realized through Tommy Tomlinson’s high altitude testing in the Northrop Gamma and DC's that, the cabin needed to be pressurized in order to comfortably and continuously fly 'above the clouds' in the 20,000 foot range. The new STRATOLINER 307 was the very first aircraft with this new feature. The pressure differential was 2.5 psi (17 kPa), so at 14,700 ft. (4,480 m) the cabin altitude was 8,000 ft. (2,440 m). The Model 307 had capacity for a crew of five and 33 passengers. The cabin was nearly 12 ft. (3.6 m) across. It was the first land-based aircraft to include a flight engineer as a crew member (several flying boats had included a flight engineer position earlier). It changed the whole outlook of the future of global passenger travel. Another milestone first under the leadership of Jack Frye. 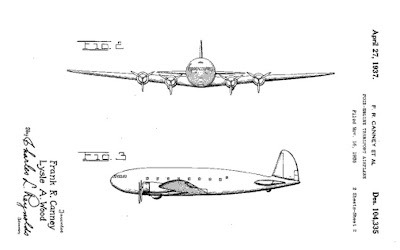 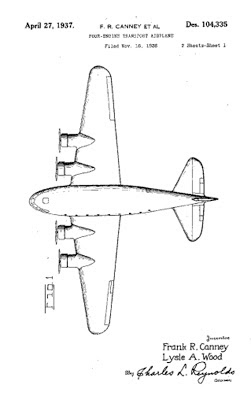 Here is a great 1940's video of the Stratoliner sponsored by Fashion Designs with the iconic background tones of the Glenn Miller Band. This is luxury flying at its best in the new pressurized cabin that paved the way to modern comfortable worldwide travel.

Too read about the 307's developement and service history, click here

1940 marks the year in which Celestial Navigation becomes a reality for the first time in airline history. TWA pilots under Jack Frye begin ground breaking training classes that will enable them to fly a plane 'anywhere in the world"! This would greatly benefit the war effort ferrying cargo and troops over the ocean. TWA navigation engineer Peter Redpath is in charge of the new program in which the first pilots to be trained are Stratoliner aircraft pilots. It will be a streamlined version of oceanic navigation utilizing a sextant in conjunction with a chronometer watch and astronomical tables. 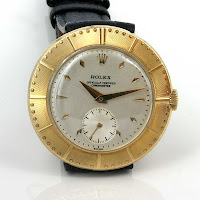 This is another first under Jacks visionary leadership that continued to propel TWA as the industry leader in long range airline travel, dependability and safety. 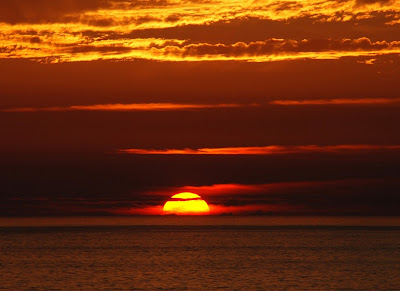 TWA is now fully underway providing daily Transcontinental Skyliner flights with the DC-3 aircraft. Many creature comforts are being instituted to the highest degree of the day. And landmark sightseeing from the air is strategically timed for the greatest visability. All of this adds up to Jack Frye's original motto of safety, passenger comfort and schedule from which he invisioned his company way back in the 20's. Here is a video of one such flight from New York to Los Angeles.

Video provided by Bomberguy
Posted by EJohnson at 11:05 AM No comments:

These gentleman is with whom it all started. I have seen this photograph from 1924 many times on the web but the noted caption was missing. The one takeaway I get from this photograph is how smartly dressed they were at all times. Whether flying, wrenching on a Jenny or in the presence of business associates, Paul, Tommy, Jack and Walter were consistantly impecably dressed.
In contrast today, this demeaner seems to be laxidasical at best. To these flying businessmen, there was never a good reason not to wear a tie and present their best selves. 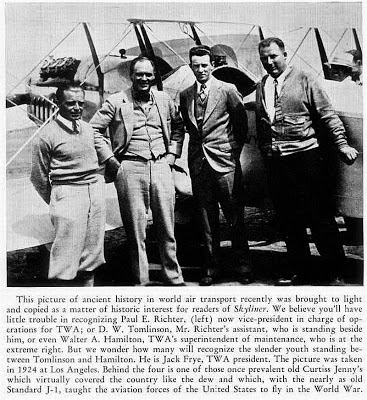 Image courtesy WHMCKC
Posted by EJohnson at 10:51 PM No comments: