The Frye Ranch in Wheeler Texas is where Jack Frye began his trek towards becoming one of America’s greatest aviators and Airline executives. Who would have known that as a kid raising cattle and tending to the family needs on the ranch, he would lead one of the world’s greatest airline companies!

Excited to finally be able to visit Jack’s childhood home, we began the trip from southern California driving 16 hours to Wheeler Texas. When we arrived we decided to pass through and pay our respects at Jack Frye’s gravesite. This was quite an experience to actually visit and remember the famous Jack Frye who is mostly unknown to the American public. We also paid respects to his brother Donald Frye and parents William and Nellie Frye. The Wheeler cemetery is of the old fashioned and simple grounds without much beauty and ambiance and wasn't manicured very well today. And in retrospect, it’s kind of sad to me that this great man that impacted American society so much is left in a lonely, dusty and less than spectacular gravesite. But then again, Jack would probably not have wanted any special attention made upon him, the kind and unassuming man that he was. We were blessed to have been able to finally pay our respects this day.

NOTE: To view photos full size, right click on them and open in a new window. 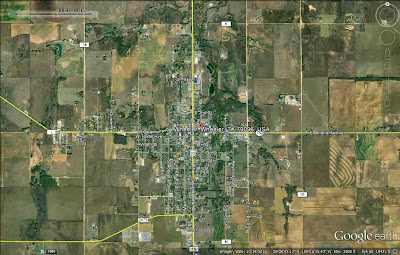 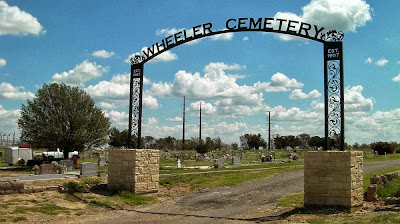 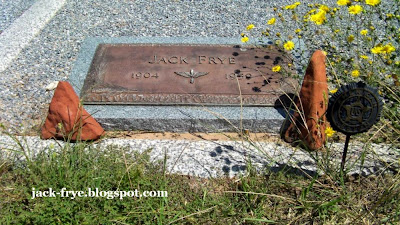 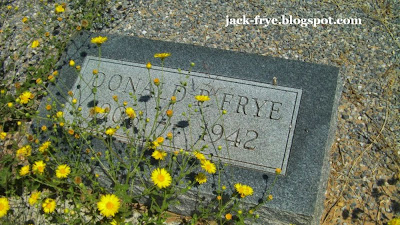 After an hour of paying our respects, we drove on over to Sweetwater Oklahoma, 21 miles to the east on highway 152. If you remember Jack was born in Sweetwater in 1904 while his parents William and Nellie were on the way to Wheeler to settle on the Frye Ranch. I was hoping to find somebody that might remember the story of Jack Frye in hopes they would be able to point us to any dwelling where he was actually born. Well, the main intersection of Sweetwater was found to be nothing but a gas station, a convenience store and a couple outcrop buildings. The intersection was bustling with traffic consisting of construction equipment such as gas rigs, earth moving tractors and all kinds of farming equipment overcoming the small 4 corner intersection of Hwy 152 & 30. We even witnessed an accident where a stake bed truck hauling a large backhoe and trailer hit a new Ford F250 as it tried to miss the stake bed turning into the gas station parking lot. The result was the large load hit his brakes very hard, clipped the rear of the F250 and broke the steering arms in the process! Anyway, there will need to be more research done to try and pinpoint where Jack was born. 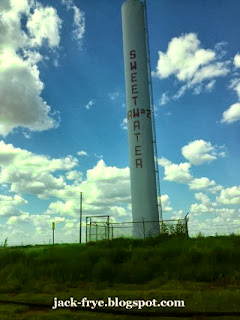 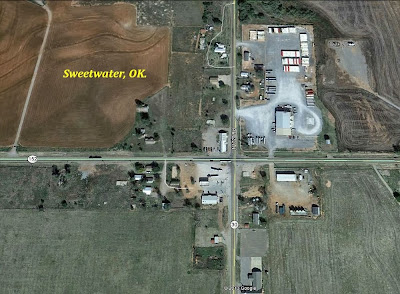 Sweetwater Texas
So we drove back to Wheeler and stopped by the City building to see if they knew where exactly the Frye Ranch was located. I knew it was somewhere northeast of Wheeler, but the exact spot could have been anywhere on the hundreds of thousands of acres surrounding us. And I also knew the Puryear family was residing on the property, so, I spoke with a nice lady at the city by the name of Claudine and she knew right away that Tom Puryear would be able to help. I gave her a Jack Frye Blog card, explained who I was in relation to the Frye family and she gave the residence a call. After they hung up Claudine said Tom would be calling me. 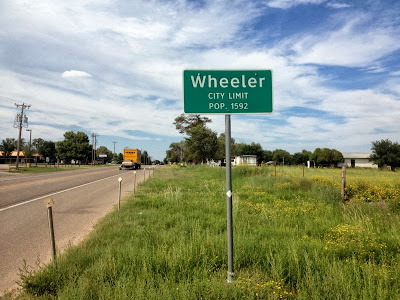 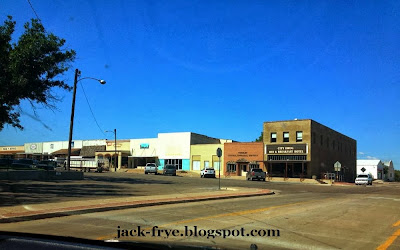 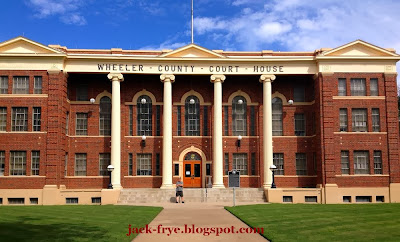 Wheeler County Courthouse
Sure enough, about an hour later Tom called me and we had a nice conversation about the family and he gave me exact directions to the Frye Ranch location. Much to my surprise, Tom’s home was no more than 300 yards away from the Frye dwellings! Unfortunately we were unable to personally meet Tom as he had a doctor’s appointment in Abilene, but as we drove into the Puryear Ranch where the Frye dwellings are located, his wife Karen was on the way out and met us on their driveway. What a wonderful and sweet lady Mrs. Puryear is, and so accommodating. We chatted a few minutes about Jack and Emily and their daughter Nevajac, and she was very interested to hear more. She said, Jack was the hero of the family and once I mentioned Nevajac, she suddenly remembered the unique name. Mrs. Puryear said we could drive down to the Frye dwellings, walk around and check out the whole area as we pleased. By now I’m completely thrilled and gave her a big hug.
After we parted company with Mrs. Puryear, I began to experience a sense of connection in a way that reminded me of my upbringing in Apple Valley, CA. Our family also lived out of town with no neighbors or stores and commerce accommodations. We knew what it meant to be without and to conserve of our resources on our 10 acre homestead. As we rounded the Puryear home the first thought I had was young Jack meeting those 3 stranded pilots in the field of which I believe I was viewing right in front of us! This accounting has been shared by Jack’s sister Sunny as being 3 Army Curtiss JN-4 “Jennies”, a plane Jack would become very familiar with a few years later at Burdett Field, Los Angeles. 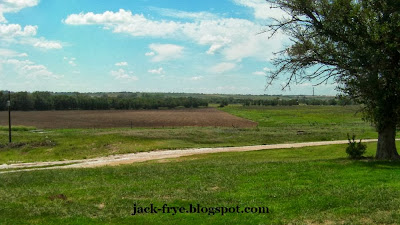 Looking from the front door, the Frye field
where Jack helped the stranded pilots.
Then as the scene opened before our eyes, there it is, The Frye Ranch dwellings. Just a beautiful and lush area that has the old red brick home and the white two story home in all they’re splendor. And a new home on site now occupied by the son of the Puryears. 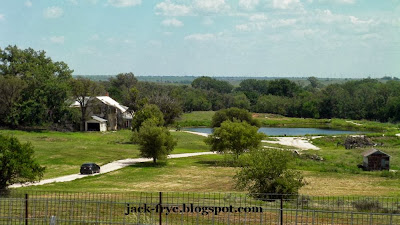 The Frye Ranch at last! 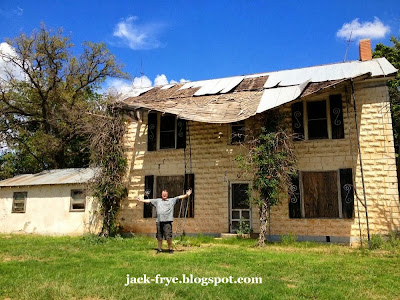 As you can see the 2 story home roofing is deteriorating badly though, the brick walls and foundation are solid and intact. The Puryears keep the grounds cut but the rear of the dwellings are overgrown with thick foliage.
We also learned the old Springhouse has finally succumbed to a rising water level and is now completely underwater. The pond is now a lake full of catfish. If you look closely at the photo below, you will see a slightly lighter colored area under the water. That’s the Springhouse! 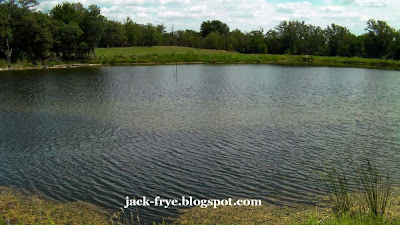 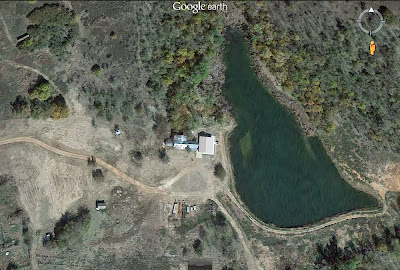 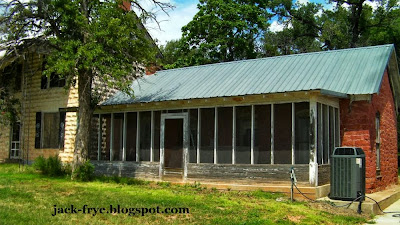 The old Red Brick House with new tin roof. This dwelling was built in 1884 by Jacks grandparents, Henry and Lula Frye. According to Tom Puryear, the home hasn’t been opened in over 30 years, and he has plans to do some restoration work inside. 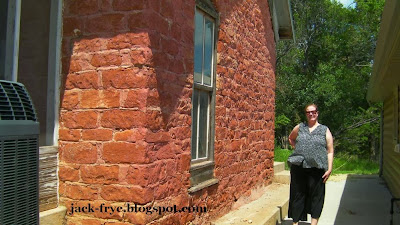 Kelly standing next to the Red Brick House enjoying the visit. 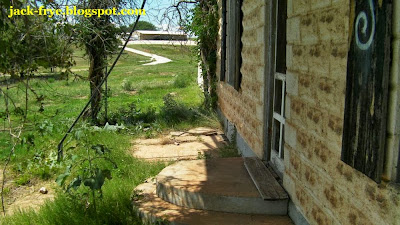 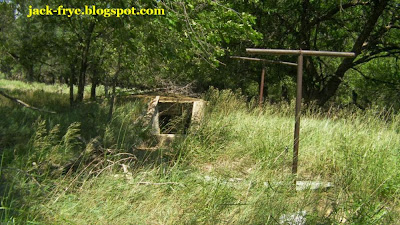 One of two underground cool storage lockers behind the house 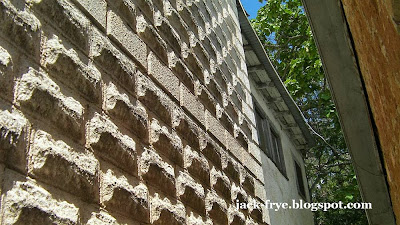 View of the rugged brick wall texture on the two story home. 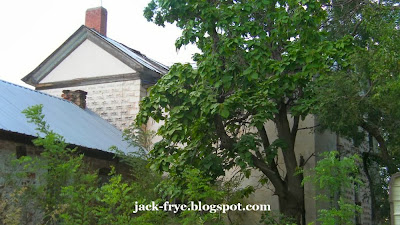 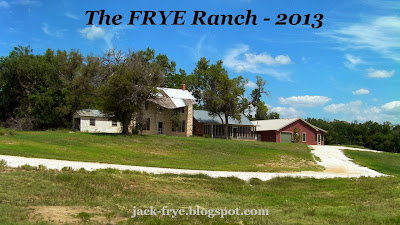 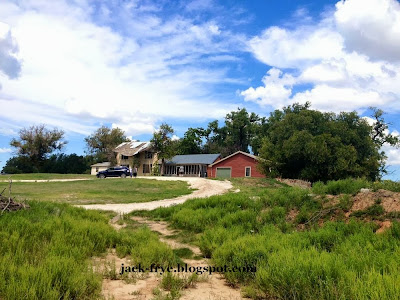 Shot of the dwellings from the lake edge. Beautiful clouds! 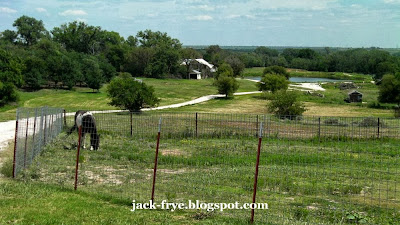 A great panoramic shot of the Frye Ranch
We had an unbelievable time visiting the Frye Ranch. I have read many accountings of this place and to be able to set my own eyes and breath and smell the air that Jack did was a wonderful experience. If I could dream a little bit, I can envision a Jack Frye Memorial being erected here with of all things a shiney DC-3 aircraft in the field commemorating Jacks impact on airline and cargo transportation that changed the world. Yes, Jack Frye truly and still is the hero of the family… and TWA.
This ends the Jack Frye Safari to Wheeler Texas. I hope you have enjoyed our trip and the photos of the old Frye Ranch. I will be producing a video of our trip soon. This was a very enriching, long traveled and fulfilling journey I will always treasure. I want to thank the Puryear Family for their graciousness in allowing us to experience the property as intimately as we did. They are wonderful people that have a long history with the Frye Ranch dating back to the very beginning. Please feel free to leave a comment at the bottom of this entry. Many blessings… Eric 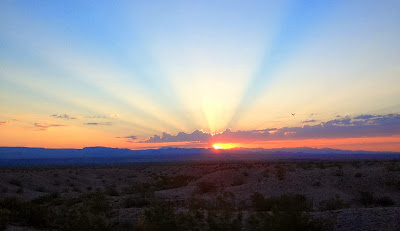