Constellation coming Back for Service! 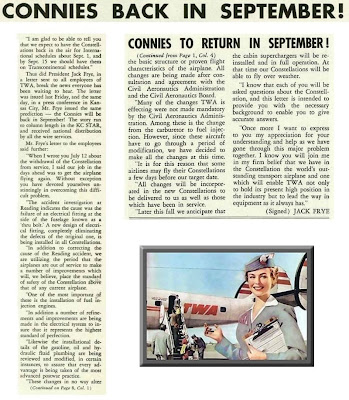 JACK FRYE announces the return of the Connie to full service with new improvements including, new fuel injected engines. 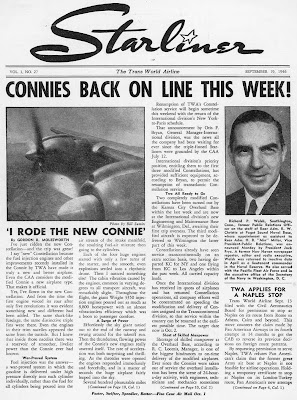 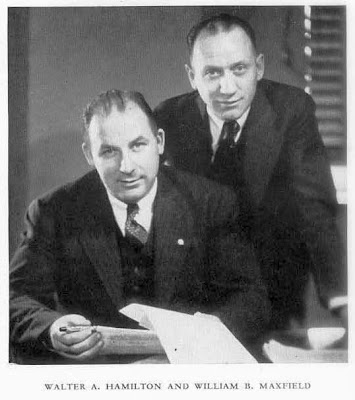 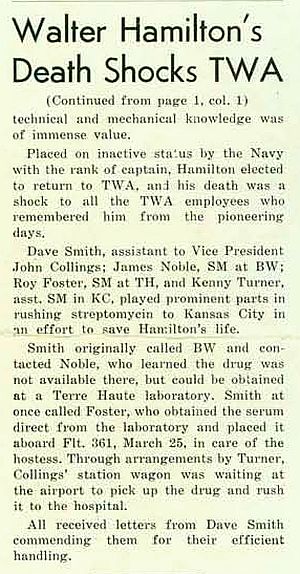 Posted by EJohnson at 5:06 PM No comments:

Of all airliners ever built in America, the career of the "Constellation" has to be amongst the most colorful. A more beautiful airliner was never built, with its sensuously curved fuselage and superb streamlining. It simply looked like something futuristic, fast, exciting and beautiful!

Then something happened to the Constellation that interrupted its flight course...

The Constellation had two accidents in the first 6 months of service, temporarily curtailing its career as a passenger airliner.


The accidents prompted the suspension of the Constellation's airworthiness certificate until Lockheed could modify the design. 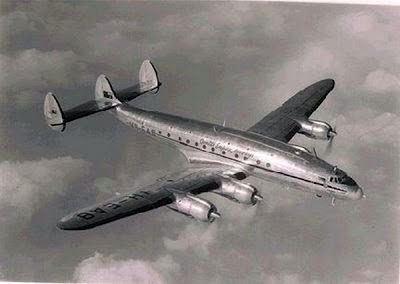 TWA Constellation Star of Lisbon was the no.3 Connie off the assembly line of which during a training flight at Reading Municipal Airport, PA., experienced a cockpit fire shortly after take-off at 3,000 ft elevation. The cause of the accident was determined to be at least one of the generator lead-through studs in the fuselage skin of the forward baggage compartment. Intense local heating of the stud assembly made of dissimilar metals resulted from electrical arching causing the aircraft insulation to ignite, filling the cockpit with heavy smoke to where the flight crew were unable to navigate the aircraft to a safe landing killing 5 of the 6 crewmen on board. The accident ultimately grounded all Constellations with all airlines. 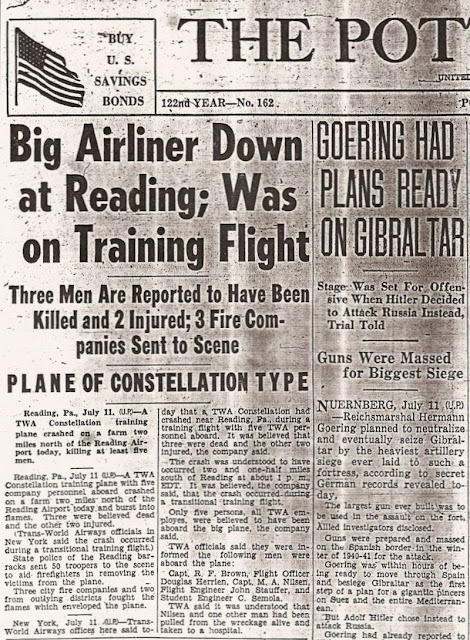 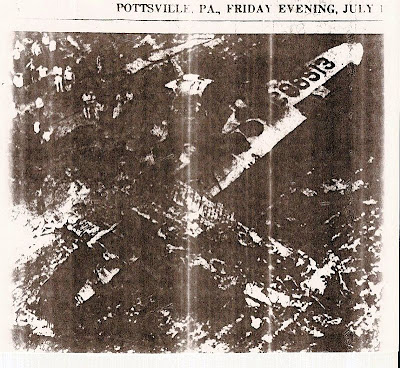 Needless to say, this was a very serious matter for not only TWA and the grounding of its brand new fleet of Constellations, and other airline companies, but a very sad day for the families that lost their loved ones. As a result of the grounding by the Civil Aeronautics Board, Jack Frye's company and Lockheed went into overdrive to remedy the situation to instill confidence with the flying public.

A letter from the President:

Posted by EJohnson at 1:41 PM No comments: 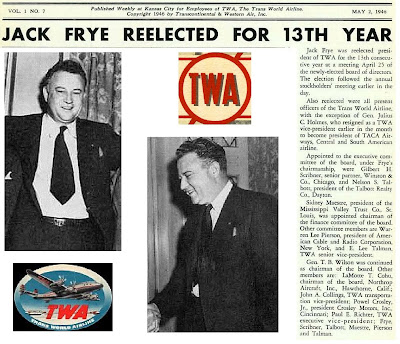 On April 25, 1946, Jack Frye was re-elected TWA President for a record 13th consecutive year. He was only 42 years old. By this time in his career he had navigated the company to great heights and many notable firsts as the worldwide leader of airline travel. A global way of life impact rarely if ever seen even in modern times today. The only real comparison I can think of is the introduction and explosion of the first real personal computer by IBM in 1973 called the SCAMP. From then on the rest is history, just like air travel when Jack Frye, Paul Richter and Walt Hamilton worked the dusty Burdett Field in 1925 in those rickety and cumbersome Fokker's.


Yes, Jack Frye to this point had seen it all and done it all. We owe a great debt of thanks and remembrance to this man and his team of pioneers at TWA for expanding mankind's vision to frontiers beyond where one could never have imagined prior. Oh sure, someone else would have come along and threaded a path to airline greatness sometime during the early 20th century, but I dare say it would not have come close to the purposed bravado and success in the big way Jack Frye pioneered. He did it his way, the Frye way...
Below is a company memo in April 1946 of the Flying Presidents thoughts and leadership regarding some new challenges as a result of TWA's incredible industry leading progress which came at a large cost... The pioneering airline was about to endure some great challenges even Jack Frye couldn't tame as little did he know, 2-1/2 months later the Constellation, the airliner with all the hope of TWA's bright future  upon its wings would be grounded nationwide! Could it be that lucky 13 was about to turn - unlucky?

A positive, forward thinking letter from the President: 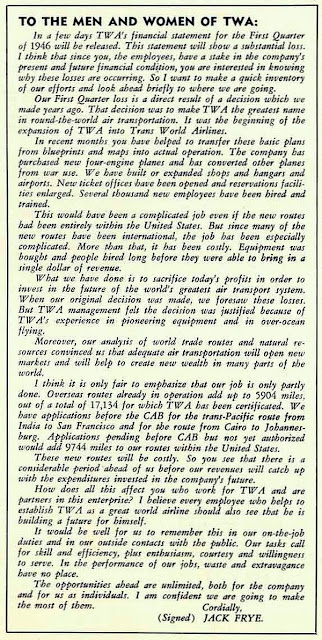 Images courtesy WHMCKC
Posted by EJohnson at 1:00 AM No comments: 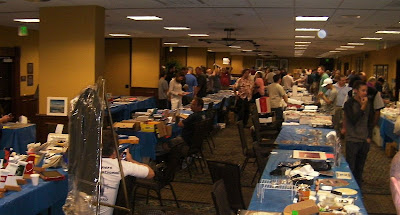 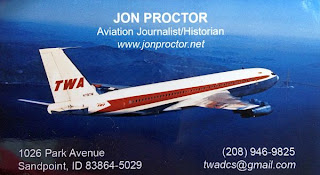 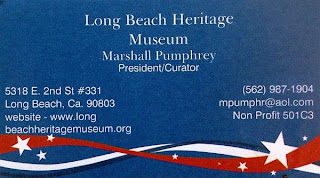 'Three Muskateers' of TWA Together Again 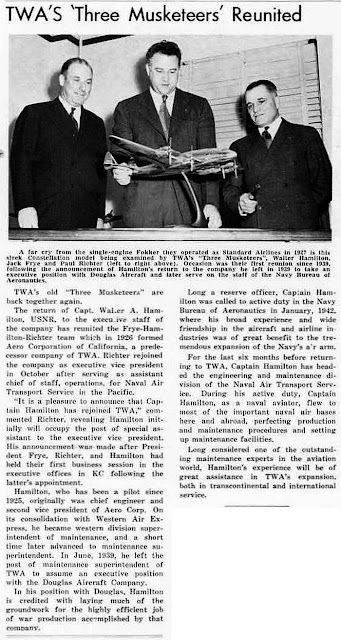 Since the early days when stick and canvas planes were the standard tools of the trade for Aero Corp and Standard Airlines, these three gentleman, Hamilton, Frye and Richter had a common bond and determination to build a company the flying public would have full confidence in, and experience a travel mode second to none. Glamour, comfort and safety were these pioneers normal way of doing business and they did it better than any other during the pioneering era of the 1920's.
Later, Walt Hamilton served in the USNR and as an executive with Douglas Aircraft, and Paul Richter served as assistant chief of staff of the Naval Air Transport service. The three reunited in 1945 with TWA as the original trio again with old friend, pilot and president, Jack Frye. Resumption of business and forward thinking from the top with the Three Musketeers running the show infused excitement and a positive outlook to the future throughout the company. TWA employee's loved The Three Musketeers and they loved their employees. They were glad to be back together again.
Posted by EJohnson at 5:04 PM No comments: 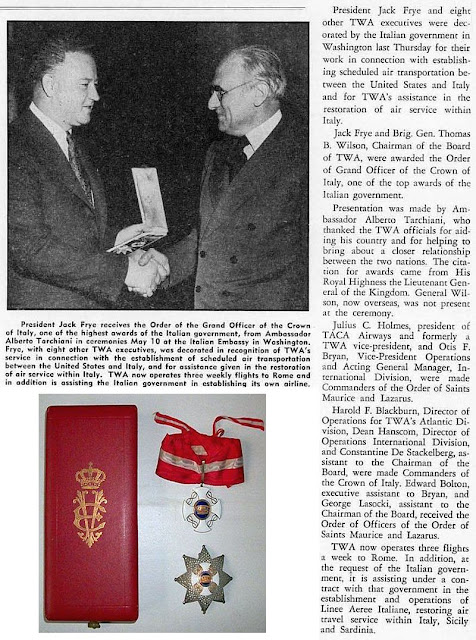 The "Order of the Grand Officer of the Crown of Italy" is awarded to Jack Frye in May of 1945 from Ambassador Alberto Tarchiani for Frye's leadership in restoring air service within Italy. This is just one of many awards and accolades presented to Frye in his illustrious airline career.

Posted by EJohnson at 9:12 PM No comments: